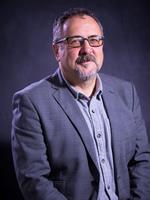 Will Fleming started practicing his career in marketing in the mid 1980’s, initially working for British Gas Scotland in Marketing Planning and Marketing Research. He moved to Wales to become Neath Rugby Club’s Commercial Manager negotiating deals for their first ever club and kit sponsor. He moved to on to Swansea City Football Club before taking a change of direction into the brewing industry when he became the Marketing Services Manager at Crown Buckley and then Freetrade Marketing Manager at S.A. Brain & Co. in Cardiff. It was from here he entered academia as a Senior Lecturer in Marketing and Course Director for the Chartered Institute of Marketing (CIM) professional qualifications.

The subject areas he has covered include:

It is no surprise that his research interests are concentrated on the practicalities of implementing marketing within organisations. Will has investigated;

As a full member and designated Chartered Marketer of the CIM Will is a great advocate of the professional body and he mentored a team of students that successfully won the 2014 national competition for universities called “the Pitch”.