I obtained my PhD in 2009 from UPC-BarcelonaTech. During this period I received three awards from the European Association for Computational Methods in Applied Sciences, the Spanish Association for Computational Methods in Engineering and the publisher Birkhauser-Verlag for the best thesis in Spain and Europe. In 2009 I moved to Swansea, to work in the renowned Zienkiewicz Centre for Computational Engineering as a post-doctoral research assistant and I became faculty member in 2012. Since then, I have received a number of honours and awards from the publisher EMERALD and the Welsh government.

I am a fellow member of Advance HE (formerly the Higher Education Academy), fellow of the Institute of Mathematics and its Applications and chartered mathematician.

My research interest is the development, analysis and application of advanced discretisation methods to problems of industrial interest. I am particularly interested in methods that are able to account for an accurate boundary representation, bridging the gap between computer aided design (CAD) and finite element analysis. The computational techniques that I develop have applications across a wide range of problems in engineering, including fluid dynamics, electromagnetics, solid mechanics and heat transfer.

Recently, I have been actively working in the field of reduced order modelling, developing novel methods to reduce the complexity of problems that require a parametric analysis and fast queries. This work includes the development of methods such as the proper generalised decomposition method, the proper orthogonal decomposition method and machine learning.

My research is done in collaboration with several industries, research centres and universities. The most recent collaborations are: 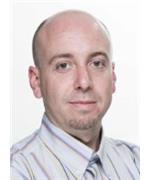