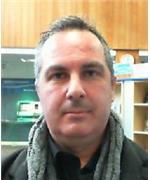 Georgios Dimitropoulos is an award-winning film director, producer, innovation incubator, and academic. He founded and incubated several companies in the creative industries and broadcast media. He received 40 Awards from various International Film Festivals, and his films have been selected and screened in more than 70 Film Festivals around the world. He has travelled and worked in 50+ countries for various projects and ventures involving third sector NGOs, NPOs, CBOs, public and private sector organisations. He received 9 international awards of excellence for transformational leadership and disruptive innovation. Consulting businesses and governments in the last 20 years with their organisational performance effectiveness and growth acceleration via transformational leadership, crisis management, and process innovation.

Georgios is a lecturer at the Department of Media and Communication and the Head of the Media Suite Innovation Lab at Swansea University. Georgios is a TEDx speaker and has been researching in the areas of Digital Democracy, Surveillance Capitalism, and Content Verification Technologies. He is a strategic adviser to regional creative consortiums and engagement projects. He is donating his time contributing to regional engagement projects and leading not-for-profit community initiatives by promoting media literacy and the use of ethical technologies for the fight against inequality and online disinformation. He is devoted to the arts, culture, nature conservation, and sustainable use of biodiversity, which he promotes through his documentary filmmaking.