Following a two-year break due to the Covid-19 pandemic, the date for the 2022 Welsh Varsity between Cardiff and Swansea Universities has been confirmed.

Swansea will host this year’s week-long festival of sport, with most fixtures and the showpiece rugby matches taking place on Wednesday 27 April.

The Welsh Varsity initially began as a rugby match between Cardiff and Swansea Universities at the Cardiff Arms Park in 1997 but has since grown year-on-year and is now the largest student multi-sport event in the UK.

Throughout the week-long festival of sport, students will compete in more than 30 different sports for the coveted Welsh Varsity Shield, including: Ultimate Frisbee; swimming; golf; fencing; squash; boxing; basketball and hockey.

Cardiff University currently retain both the Welsh Varsity Shield and Cup, following their victories in 2019.

Georgia Smith, Sports Officer at Swansea University Students’ Union, said: “I’m so excited to see Welsh Varsity returning, and if that wasn’t good enough, it’s in Swansea! After what’s been a tough couple of years for students, I know that everyone at Swansea University will be thrilled to see Sketty Lane bleed green once again.

“It will be my pleasure to welcome current students and alumni back to see the biggest varsity in Wales to celebrate sport and friendly rivalry.

“My message to all Swansea students is get ready to sing and chant for Swansea and show Cardiff what the Green and White Army's made of!”

The Welsh Varsity is the second biggest Varsity event in the UK behind Oxford and Cambridge. The event is supported by thousands of students from Swansea and Cardiff University, the official attendance for the festival of day sports in 2019 was 8,000 students with 13,000 students attending the Men's and Women's rugby matches at The Principality Stadum, Cardiff.

The Welsh Varsity is a festival of sport, the tournament sees 48 fixtures across a range of sports compete for the coveted Welsh Varsity Shield. When in Swansea the various sports take place at the Swansea Bay Sports Park with the event culminating with the showcase men's and the women's rugby matches being hosted at The Liberty Stadium.

For more information on the results of the 2019 Welsh Varsity please click here.

A look at the past

The inaugural Welsh Varsity match was played in 1997 in the Welsh Capital and home of Cardiff Rugby Football Club, Cardiff Arms Park. The game was played by the two Welsh premier universities; Cardiff and Swansea and the highly successful “Varsity” model was adopted with all proceeds from the event going to Oxfam.

In the early years the Welsh Varsity match was held alternatively at Cardiff Arms Park and St Helens, the home of Swansea Rugby Club. Historically Swansea University enjoy the tag of perennial favourites at the Welsh Varsity Match winning to date; thirteen Varsities.

Swansea University have regularly enjoyed the ability to select from a vast pool of very talented players such as Welsh nationals Alun Wynn Jones, Ritchie Pugh and Dwayne Peel. 2007 saw Swansea field no less than 11 FIRA Internationals at varying ages resulting in a win at Cardiff Arms Park.

To find out more, visit the Welsh Varsity Web Page.

The Welsh Varsity 2022 In Photos 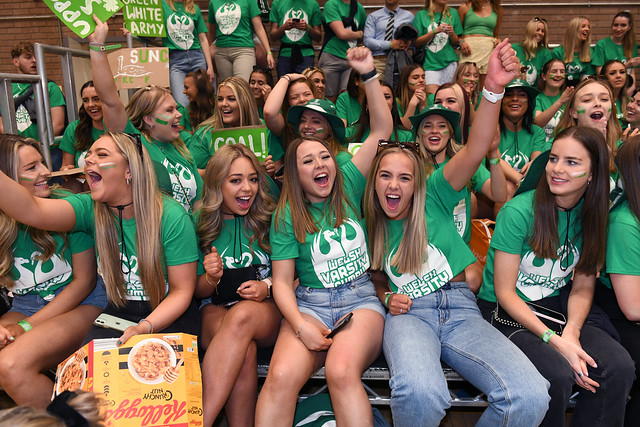